Neonatal hypoxic ischaemic encephalopathy (HIE) occurs in approx. 1.5 per 1000 live births at term and is associated with significant mortality and long-term morbidity, up to 50% of neonates having a severe outcome of death or disability.

Outcomes can also include cerebral palsy and cognitive impairments, often related to patterns of injury detected on neonatal MRI. However, approximately 25% of neonates with HIE will have a “normal” MRI and are traditionally considered to have a good long-term outcome. This is not the full picture, recent studies report long-term deficits in memory and cognition that may relate to disruptions in the Papez circuit, crucial for memory function (e.g. Annink et al, 2021) and sensitive to injury in hypoxia.

Here, we will test this hypothesis, utilising an MRI dataset of infants with HIE, scanned while at hospital. These infants will be compared to a large, well-characterised reference cohort of over 800 term born control neonates collected as part of the developing Human Connectome Project (dHCP) with high resolution structural and diffusion MRI acquired with an identical acquisition. The student will test whether alterations in hippocampal volumes and Papez subcortical network connections underlie long-term memory problems assessed in this cohort at childhood age (6-10 years). 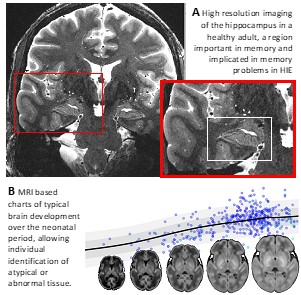