Ovarian ageing is a naturally occurring process that results in a gradual decline in ovarian function and cessation at menopause. In addition to declining fertility, ovarian ageing results in several metabolic and cognitive changes which increase the risk for development of multiple disorders including osteoporosis and heart disease. Moreover, for 1 in 100 women under the age of 40, premature ovarian ageing can occur with unknown aetiology in most cases. However, our understanding of the mechanisms governing ovarian ageing remains limited, highlighting an unmet need for novel discoveries in this area.

Figure 1: Schematic representation of ovarian ageing. The young ovary is packed with follicles at different stages of development (the central oocyte -dark pink- is surrounded by somatic cells that support its development), contrasting to the ageing ovary where follicles are depleted. The mechanisms governing ovarian ageing remain largely unknown and if identified may provide a way to delay menopause.

Objectives:
The overall aim of this project is to identify novel gene expression changes that occur during ovarian ageing and determine their role in this process.

1. To isolate ovarian cells from young versus older women undergoing IVF and conduct RNAseq analysis to determine changes in ovarian gene expression that occur with ageing (Year 1)
2. To validate and phenotype identified genes via knockdown and over-expression studies and functionally analyse their effects in primary human ovarian cells and ex vivo ovarian mouse follicle cultures (Year 2)
3. To determine the effects of modifying ageing pathways identified on the phenotype of progression of ovarian ageing in mouse models of accelerated ovarian ageing (Year 3). 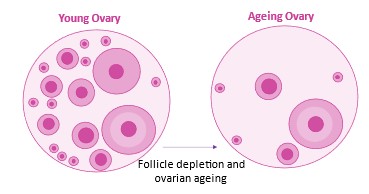